'Prophet is symbol of perfection' 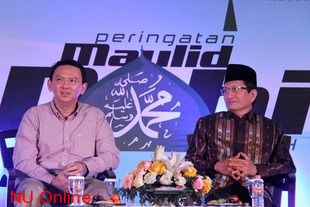 Jakarta, NU Online
This year's Maulid Nabi, a weeks-long commemoration of the Prophet Muhammad's birth, was celebrated with peace and tolerance.  <>

"He is beyond comparison, not even the Prophet Isa (Jesus). The Prophet Isa never led a government like the Prophet Muhammad did. He is truly a person with distinguished characteristics of sidiq (virtuous), fathonah (smart), amanah (trustworthy) and tabligh (God's messenger)," Jakarta Governor Basuki "Ahok" Tjahaja Purnama said during a January 18th celebration at Jakarta's SMESCO Convention Centre.

"I can't believe that Ahok knows Islamic teachings. He was well-accepted here among the entire Muslim audience," Nurita Pratiwi, a Jakarta resident who attended the ceremony, told Khabar Southeast Asia.

Nurita said even though Ahok was rejected by Islamic hardliners such as Islamic Defenders Front (FPI) because he is a Christian of Chinese descent, many Muslims are sympathetic to the governor's efforts to engage their community and lead Jakarta.

"I think people are amazed with his knowledge of Islam. He is not a Muslim but speaks like a good Muslim with his sincerity," she said.

"Muhammad was once a perfect leader and if you want to lead, you should lead with the Prophet Muhammad's characteristics," he said.

President Joko "Jokowi" Widodo, speaking in front of 5 million citizens during Maulid Nabi celebrations in Jakarta on January 3rd, said the Prophet's life is all about acceptance.

"He accepts the differences. He accepts obscenities; he responds to all of those with prayers and forgiveness. Now, this is the day where we all should remember the Prophet's teachings. He taught more than just words. He gave his life itself as a good example," Jokowi said.

He encouraged all Indonesians to continue to follow Prophet Muhammad's example.

"Let us continue to spread his message in our daily lives. Let us be Muslims who care for others, Muslims with peace and tolerance. Let as also pray for those who are currently suffering and who have lost their loved one," he continued.

Syariffudin, a cleric from Central Jakarta, said that Jokowi's message was inspiring.

"He spoke with his style. It was very touching. I think his message is not only well accepted by Muslims, but every citizen," he told Khabar.

"Our morals are the key for spreading the Prophet's messages. Our Prophet said that social change cannot happen if each individual refuses to change. So be a good example for your community wherever you are. Be the light, follow the Prophet's pattern of perfection," he said.

"He never called servants his underlings; he called them 'my best friends'. We can see he treated everyone the same," he said.

"Jokowi sent a message of tolerance. Basuki sent a message about Prophet Muhammad's leadership serving as a good example, and the religious minister talked about morality. I feel these speeches are very refreshing," he told Khabar.