President prays for country with ulema, santri in Pekalongan 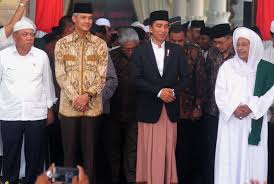 Pekalongan, NU Online
President Joko Widodo prayed for the countrys peace and prosperity with Islamic clerics and students at the commemoration of the birth of Prophet Mohammad (Maulid Nabi) at Sholawat Kanzus Hall in Pekalongan, Central Java, on Sunday.

The prayers event was led by revered cleric Habib Luthfi bin Yahya and attended by hundreds of Islamic boarding schools.

In his speech President Jokowi as he is also called emphasized the importance of preserving the harmony and unity in the country with regard to the diversity of tribes and cultures.

He said Islam teaches people to preserve unity and cohesiveness as well as respect to diversity of tribes and groups.

"It means we must be grateful for it as Gods blessing and therefore must also preserve it. We are different from other countries. Other countries may possibly have only one ethnic group but we have 700. This must be accepted as a blessing. They will become a powerful strength if we can unite them and therefore we must be grateful fir them," he said.

"I believe and God willing our country with its strength and potential would become a great country that other countries would take into account. However if we are busy fighting and would not unite and consolidate our potentials we would only become a losing state," he said. (Antara/Masdar)