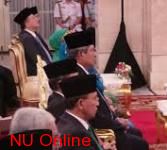 The birthday celebrations commenced at 8 p.m. and were attended by the First Lady Mrs. Ani Yudhoyono, Vice President Boediono, and Mrs. Herawati Boediono.

Ministers of the second United Indonesia Cabinet, leaders of state institutions, and ambassadors of friendly countries also participated in the celebrations.

In his address to commemorate the birthday of Prophet Muhammad, the head of state called on all Indonesian Muslims to emulate the sublime nature of the prophet.

Through his Twitter account @SBYudhoyono, the president tweeted, "Let us emulate the sublime nature and follow the teachings of the Prophet Muhammad, who had set a good example for all."

The president noted that the prophet was a role model for all Muslims to learn and emulate his thoughts, his words, his personality, his loving attitude towards his people, and respecting others.

The birthday of the Prophet Muhammad, commonly called Maulid Nabi in Indonesia, is commemorated by Muslims during the month of Rabi-al-Awwal, the third month of the Muslim calendar.

Muhammad was approximately born in the year 570 of the Gregorian calendar.

He was raised by his uncle after both his parents died when he was very young. The Prophet Muhammad grew up to be a shepherd and also honed the skills to trade like a merchant.

He began preaching at around the age of 40. Eventually, he and his followers, totaling around ten thousand, took control of Mecca.

Muhammad died of an illness in 632, after integrating Arabia into a single Muslim entity.